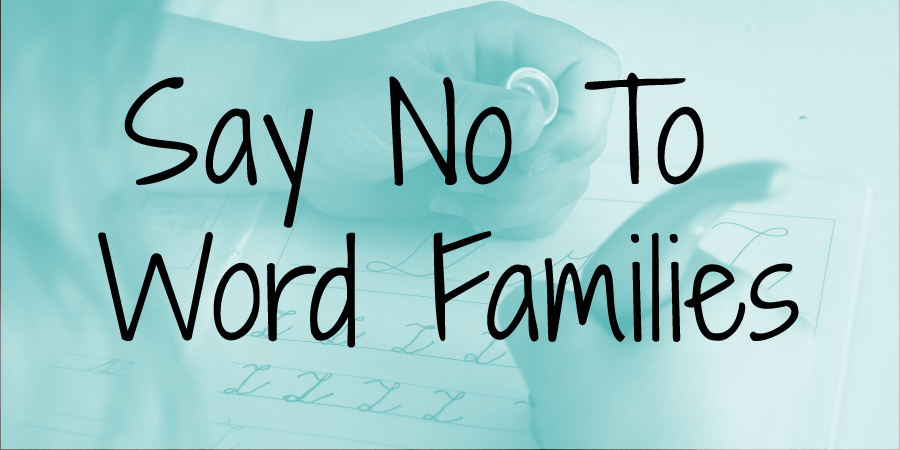 Do not use word families.

Here\'s the problem: Let\'s say we have a teacher who is spending a whole week focusing on /at/ words. You know- hat, mat, fat…  Next thing you know, the children see the words hated, mating, and father, and what children were taught is hindering them, not helping them.

Using the \"look for small words within larger words\" rarely works. So rather than spending so much time teaching word families, why not just teach the ways letters work to make words?

You see, if we teach letter sounds, and then we teach kids to blend the sounds together from left to right, it doesn\'t matter how the word ends. The word pit works the same way the word fat works. They just have different letters. Know the letter sounds? Know how to blend the sounds from left to right? You can read words. Mixing up the arrangement of the letters within the words is not a challenge. We just make the sounds we see.

There are only forty-some sounds, but there are hundreds of word families. Why would we complicate things for our children? Do they really need to memorize the -ate words and the -ime words, and the -ope words, etc.? Or could we just learn that magic e\'s make the vowels say their names rather than their other (short) sounds? We could even share that magic e\'s can do their magic wherever they\'re found within words (use, hiker, grateful). Then many more words will be available to our children!

Okay, so what about the words like: have, love, give? What now, phonics fans? Simple. Just tell kids, \"If it doesn\'t work using the rule, flip it. Flip the vowel sound back to its other sound.\" (I show kids a flipping motion with my hand.) Kids understand that. There you have it. And it almost always works.

When I work with older children, they can rarely explain the difference between hoping and hopping. They often have no idea which is which, let alone why.

So I tell kids, \"Any vowel can jump (like a magic e).\" They don\'t always, but they can. But remember- vowels can only jump over one letter. (Except in words like bathe…but they\'re very rare, so don\'t panic.)

Now, my Professor Phonics friends… You know that we\'re talking about open vowels in syllables, really, but kids who cannot read the words cannot determine how the word is pronounced, let alone how many syllables there are and how the word is divided, so I just say, \"Any vowel can jump.\"