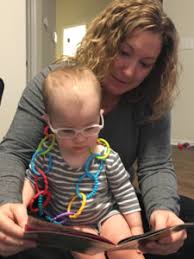 When I was six years old, I was going through a \"rough patch.\" I hated my first-grade life. My single mom had moved into an apartment building, and my bike was stolen during the first week we were there. I had a mean teacher who swatted me on the legs when I did something wrong, and this was back in the day when girls wore dresses!

For Christmas, I did receive the Baby That-a-Way doll that I\'d wanted, so there was that. 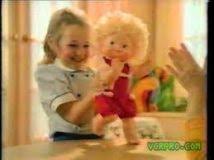 (If the girl in this picture had an ever-present fever blister and unkempt hair, this could have been me!)

Fourteen years after that less-than-charmed portion of my childhood, I married my wonderful husband, and we were making plans for our lives as a couple and (hopefully!) as parents. We decided that we could live on just Mike\'s income for a while and that I should go to college.

I was 20 years old, and I had never considered college. All of my friends who were going, well, they had gone. And I was a produce clerk at a grocery store.

No complaints, here. It was kind of a dream job for me because I always loved fruit, and we could rarely afford fruit when I was a child. Potatoes for potato soup, we could afford (the watery kind with onions-bleh). We didn\'t have oranges, grapes, or watermelon… But now? Now, I was surrounded by it! Jesus loves me, yes He does! (I digress.)

My sixth-grade teacher, Mr. Blackmore, was the one who saw potential in me. He thought I was creative, so he let me decorate the classroom door. And, he thought I was smart. He didn\'t tell me so, but he used my report about Israel to show the class genius, Tony Jenkins, how a good report looked (A-). He gave me swats when I broke a rule about not talking, and he\'s the one who told me that I should start wearing deodorant. (Ugh.) But I adored him. He when he read The Hobbit to our class, I realized, for the first time, that books could be magical. I read my first chapter book, The Trolley Car Family, as a 6th grader.

Okay, so it\'s not scholarly, but I read it. That\'s something. And I adored it! (I just bought it on Amazon!)

Anyway, my school district had given standardized tests, and, in high school, I\'d been tracked into college prep classes (Thank you, God!), so our local university accepted me.

One day, at my new church, I was visiting with some of the ladies when one of them asked me, \"What are you going to major in, in school?\" I said, \"Education.\" And she asked, \"What made you decide to become a teacher?\"

I said, \"Well, I had this horrible teacher when I was a first grader. I mean, she was just awful! She smacked my legs and I could tell she didn\'t like me. Don\'t get me wrong. I probably wasn\'t the sweetest thing. I was a miserable kid, and I\'m sure that learning wasn\'t a priority for me. Anyway, I thought I would like to try being a really good first-grade teacher.\"

The woman (I was thinking her name might be Ida??) said, \"Well, I\'ll be. I taught first grade there! What year would that have been?\"

(You, wise one, probably see where this is going. I, however, did not.)

I told her that I couldn\'t recall. It\'d been such an awful experience, I honestly had no recollection, but I could name every teacher I\'d had in 2nd through 6th grades.

She asked, \"Well, what was your maiden name?\"

Now, as I\'ve mentioned, I was newly married, and we\'d just moved all of my things into our new apartment, and I\'d reminisced as I packed my yearbooks, newspaper clippings, grade cards . . . My mind flashed to those grade cards. And I could see it. The name my mean teacher had signed to my report - with no nice comments- only fat, ugly C\'s lined up across the buff cardstock . . .

I awkwardly stammered, \"I\'ve gotta go,\" and I backed out the door and high-tailed it to my car.

I felt terrible! What if that poor woman figured out that I had been speaking so badly about HER?

I want you to know that I grew to love that dear woman, Ida. As I got to know her, I admired her so! And, it wasn\'t long until I was her grandson\'s Sunday School teacher.

If she ever remembered that scrawny, unkempt kid with crooked teeth, who didn\'t care one bit about learning-and who probably was a constant headache, she never said a word.

Of my 28 years teaching (so far), I\'ve spent 10 of them as a first-grade teacher. It\'s still my favorite. And, I continue to try to be a Mr. Blackmore to my students.

I hope my students know that I\'m proud of them, too.

Anyway, that\'s how I got started doing what I do.

I teach kids. And I teach parents how to teach their own kids. I\'m not talking about parents who homeschool (Though, I believe EVERY parent is homeschooling, to some degree.) I teach parents to assume the role as their children\'s first, favorite, and most influential teacher.

If you have kids, ages 3-7, I hope that you\'ll follow my blog and opt into my newsletter. I have a lot to share with you.